I walked into Elmer’s Cafe the other day.  The only thing unusual about that is that I didn’t have my hat on.

At first, nobody said anything about it.  Elmer’s Cafe is a little bit like the barber shop in that old joke.  You know the one:  where the guy walks into a barber shop, and he’s got a rabbit on his head, and nobody wants to be the first one to tell him.  So the guy sets himself down in the barber chair, and the barber says “what’ll it be today?  A little off the chin?”

Well, the barber looks at the rabbit, and now he’s kind of stuck.  You see, he should have just told the man straight off that he had a rabbit on his head, instead of trying to sell the man a shave he didn’t really need.

Anyway, the barber finally begins to realize that honesty is the best policy.  So he says to the guy, he says, “I’m not sure I know how to do that.”

And the guy says, “oh, sorry, I forgot.”  And he reaches up and takes the rabbit off his head.  Doesn’t say anything about it, like, for example, he doesn’t say “as you can see, I have a rabbit on my head.”  He doesn’t say anything at all like that, he just takes the rabbit off his head and holds it there in his lap, the way you’d do if you were sitting in the barber chair and you suddenly realized you forgot to take your hat off.  Then he settles back in the chair again, and he says “okay, go ahead.”

Only now the barber can see the guy is completely bald under the rabbit.

So now the barber really doesn’t know what to do with this guy.  I mean, he says he wants a haircut, but he doesn’t have any hair.  So the barber, still thinking that honesty is his best way out, he says, “I’d love to cut your hair, fellah, but I don’t see how I can make it any shorter than it already is.”

Well, now the rabbit starts going crazy, wriggling around like he’s trying to break free.  It’s almost all the guy can do to hold onto the poor thing, and he glares at the barber, and says, “he doesn’t want to be shorter.  He just wants a little trim around the ears.”

At least, it was until Elmer said “where’s your hat?”

I said “just coffee, thanks.” 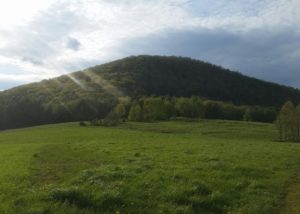 I suppose I could have told him about how I tried to climb into my hat to get away from the black flies, and how they just up and carried it away with me inside it, and how I had to jump out over a geyser and swim against the current all the way down to the ground.

I could have told him that.  I mean, after all, honesty is generally the best policy.  But then I would have had to tell him how I got home, and it’s embarrassing to admit that I rode that sunbeam all the way home, and completely forgot to leave a tip.