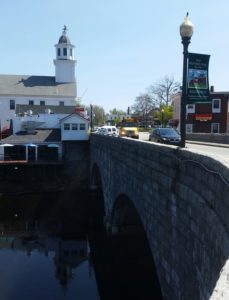 Back when this whole “wandering storyteller” project was just a crazy scheme – one that I had trouble explaining, even to my closest friends – I wondered if anybody would even be interested.  It was one of those worst nightmare scenarios:  what if I throw a party and nobody comes?  What if I reach out, and nobody’s there?  What if I tell a joke, and nobody laughs?

What if I say:  “I’m going to walk from town to town all across New England, telling stories to anyone who wants to listen!”  What if I said that, and it turned out nobody wanted to listen?

For a couple of months before I left, that nightmare looked like it just might come true.

I have a real hard time promoting myself, but I did what I could to reach out and make contact with some likely venues along the way.  Nobody called; nobody wrote back.  I couldn’t bear the thought of making all those follow-up calls and hearing all those rejections first-hand, so Kirsten graciously agreed to take over the outreach duties.  She said not to worry about it, so I didn’t worry – I just kept practicing my tales and getting my legs into shape.

Toadstool Bookshop in Milford, NH was the first venue that came back with a “Yes!  Let’s do this!”

Other venues followed, and before I knew it, I had a genuine, honest-to-goodness storytelling tour all lined up.  But that first venue was the key.  That one validated the whole crazy scheme.

So you could say, I’m partial to Milford.  I’ve been looking forward to this performance for a long time.  I really want to give them a good show.

1 thought on “Day 11: Manchester to Milford”