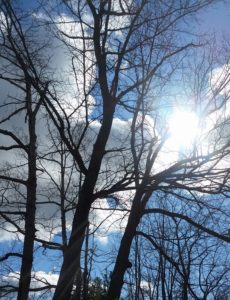 Now this, I thought, is what it was supposed to be like!  This is what it’s all about!

If I could, I would have done this whole trip by trail.  Trouble is, most trails don’t actually go anywhere.  Instead, they lead you on a merry chase through field and forest, up and down mountains, and twice around the briar patch before petering out somewhere in the middle of a swamp.

The Rockingham Rail Trail is one of the exceptions.  It runs fairly straight and true from Manchester to the outskirts of Portsmouth.  It only shows up on Google Maps if you zoom in really close.  It’s a wonder I found out about it at all – but ever since I did, I’ve been looking forward to this section of the trek more than any of the others.

And I haven’t been disappointed.  From Epping to Raymond, the trail runs pretty close to Highway 101, and traffic sounds are inescapable.  But between Raymond and Candia, the road and the trail run a bit farther apart, and it is possible in certain places to forget you can still hear the distant sounds of vehicles speeding on their way.

The trail is not heavily traveled (at least, it wasn’t today).  It is multi-use – I saw plenty of horse tracks and a couple of bicycles, but the only motorized vehicles allowed on the trail are snowmobiles, which didn’t concern me too much on a day like today.

Speaking of which, it’s so nice to feel the sun again!  A strong, cold breeze kept the early morning chilly, but the sun was determined to shine through, and eventually it succeeded.  I made sure to take plenty of breaks, even when I wasn’t tired. 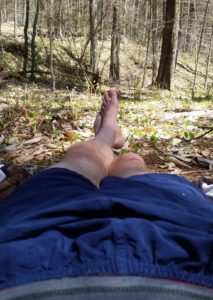 When you’re on the road and you want to give your feet a break, you have to take into account houses and dogs and people who’d rather you weren’t passing through their neighborhood at all, much less setting your pack down and taking your shoes off right there on the town commons.  But when you’re on the trail, things are a lot simpler.  I found lots of good rest spots.

I don’t know how I managed to do 13 miles today.  The mileage wasn’t really on my mind.  I was just having fun wandering along, enjoying the day. 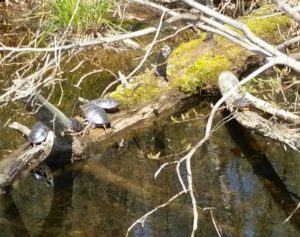 Not long after I reached my destination, I felt a crawling sensation on my back.  I reached around under my shirt and pulled off a tick.  I bet I laid down right on top of him, during one of my rest breaks.  He hadn’t even started biting me yet.  As far as I could tell, he didn’t bring any friends along.

Abner wondered what it sounds like when ticks talk.  I said “probably something like: ‘get off me, you big ham sandwich!  You’re blocking my sunlight!'”